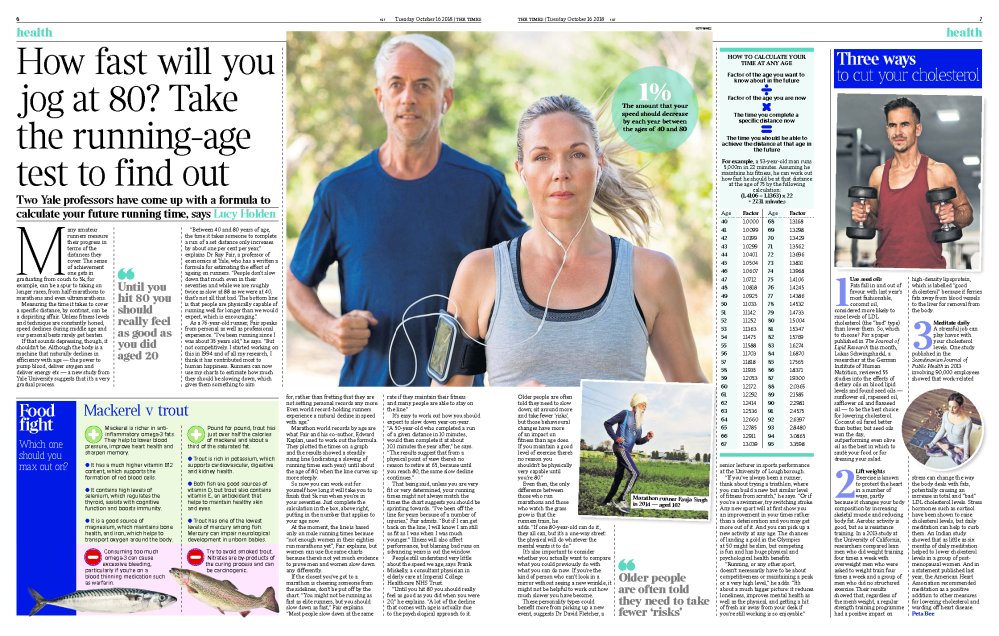 Two Yale professors have come up with a formula to calculate your future running time, says Lucy Holden

Many amateur runners measure their progress in terms of the distances they cover. The sense of achievement one gets in graduating from couch to 5k, for example, can be a spur to taking on longer races, from half-marathons to marathons and even ultramarathons.

Measuring the time it takes to cover a specific distance, by contrast, can be a dispiriting affair. Unless fitness levels and technique are constantly honed, speed declines during middle age and our personal bests rarely get beaten.

If that sounds depressing, though, it shouldn’t be. Although the body is a machine that naturally declines in efficiency with age — the power to pump blood, deliver oxygen and deliver energy etc — a new study from Yale University suggests that it’s a very gradual process.

“Between 40 and 80 years of age, the time it takes someone to complete a run of a set distance only increases by about one per cent per year,” explains Dr Ray Fair, a professor of economics at Yale, who has a written a formula for estimating the effect of ageing on runners. “People don’t slow down that much even in their seventies and while we are roughly twice as slow at 88 as we were at 40, that’s not all that bad. The bottom line is that people are physically capable of running well for longer than we would expect, which is encouraging.”

As a 76-year-old runner, Fair speaks from personal as well as professional experience. “I’ve been running since I was about 35 years old,” he says. “But not competitively. I started working on this in 1994 and of all my research, I think it has contributed most to human happiness. Runners can now use my charts to estimate how much they should be slowing down, which gives them something to aim for, rather than fretting that they are not setting personal records any more. Even world record-holding runners experience a natural decline in speed with age.”

Marathon world records by age are what Fair and his co-author, Edward Kaplan, used to work out the formula. They plotted the times on a graph and the results showed a steadily rising line (indicating a slowing of running times each year) until about the age of 80, when the line curves up more steeply.

So now you can work out for yourself how long it will take you to finish that 5k run when you’re in your seventies. Just complete the calculation in the box, above right, putting in the number that applies to your age now.

At the moment, the line is based only on male running times because “not enough women in their eighties run marathons yet”, Fair explains, but women can use the same charts because there’s not yet much evidence to prove men and women slow down any differently.

If the closest you’ve got to a marathon is cheering someone from the sidelines, don’t be put off by the chart. “You might not be running as fast as elite runners, but you should slow down as fast,” Fair explains. “Most people slow down at the same rate if they maintain their fitness and many people are able to stay on the line.”

It’s easy to work out how you should expect to slow down year-on-year. “A 50-year-old who completed a run of a given distance in 10 minutes, would then complete it at about 10.1 minutes the year after,” he says. “The results suggest that from a physical point of view there’s no reason to retire at 65, because until you reach 80, the same slow decline continues.”

That being said, unless you are very fit or very determined, your running times might not always match the times the chart suggests you should be sprinting towards. “I’ve been off the line for years because of a number of injuries,” Fair admits. “But if I can get back on the line, I will know I am still as fit as I was when I was much younger.” Illness will also affect performance, but blaming bad runs on advancing years is out the window.

“Until you hit 80 you should really feel as good as you did when you were 20,” he explains. “A lot of the decline that comes with age is actually due to the psychological approach to it.

Older people are often told they need to slow down; sit around more and take fewer ‘risks’, but those behavioural changes have more of an impact on fitness than age does. If you maintain a good level of exercise there’s no reason you shouldn’t be physically very capable until you’re 80.”

Even then, the only difference between those who run marathons and those who watch the grass grow is that the runners train, he adds. “If one 80-year-old can do it, they all can, but it’s a one-way street: the physical will do whatever the mental wants it to do.”

It’s also important to consider whether you actually want to compare what you could previously do with what you can do now. If you’re the kind of person who can’t look in a mirror without seeing a new wrinkle, it might not be helpful to work out how much slower you have become.

These personality types could benefit more from picking up a new event, suggests Dr David Fletcher, a senior lecturer in sports performance at the University of Loughborough.

“If you’ve always been a runner, think about trying a triathlon, where you can build a new but similar level of fitness from scratch,” he says. “Or if you’re a swimmer, try switching stroke. Any new sport will at first show you an improvement in your times rather than a deterioration and you may get more out of it. And you can pick up a new activity at any age. The chances of landing a gold in the Olympics at 50 might be slim, but competing is fun and has huge physical and psychological health benefits.

“Running, or any other sport, doesn’t necessarily have to be about competitiveness or maintaining a peak or a very high level,” he adds. “It’s about a much bigger picture: it reduces loneliness, improves mental health as well as the physical, and getting a hit of fresh air away from your desk if you’re still working is so enjoyable.”

Freelance journalist for national press and magazines. Memoir, Lucid, out with Simon and Schuster Feb 2022. View all posts by Lucy Holden